Distribution of the Yoruba in Nigeria and Benin 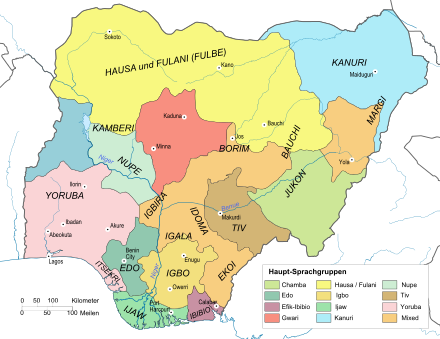 The Yoruba(Yorùbá) are a West African people who mainly live in southwestern Nigeria. There they make up 21% of the population. They live mainly in the southwestern states of Oyo, Ogun, Lagos, Ondo, Osun, Ekiti and Kwara, but also in the neighboring states of Benin, Ghana and Togo. The settlement area is still the densely populated core area of ​​Nigeria today. 22 of the 50 largest cities in the state are located there.

This is where the legendary kingdom of Ilé Ife came into being.

According to another account, there was no Yoruba ethnic group 200 years ago. The supposed common history of Yoruba-speaking groups was therefore introduced later.[1]

The early founding of cities is characteristic of their culture. The largest cities already had 100,000 inhabitants in the Middle Ages.

Yoruba is a Niger-Congo language and one of the four main languages ​​of Nigeria alongside Hausa, Igbo and English. It is a yoruboid language and is spoken by around 30 million people in Nigeria, Benin, Togo and Sierra Leone.

Yoruba as a people

The Yoruba are more of a language group than a common people. There are around 20 different subgroups. They differ in the respective dialects and in religious, political and social orders. The main groups are the Egba in the southwest, the Ijebo in the southeast, the Ijebo in the south / southeast, the Oyo in the central and northwestern area, as well as the Ijesa and the Ife in the central area, the Owo and the Ekiti and Igbombina in the northeast. They expressed their affiliation to the individual tribes or families with tribal symbols carved into the skin.

The settlement area of ​​the Yoruba was never a unified state, but split up into many city-states headed by a king. It was a very religious region. Yoruba states included Oyo, Ife, Ijebu, Ekiti, Ondo, Egba, Ibadan, Ijesha and Ketu.

All Yoruba kingdoms were traced back to the mythical founding city of Ile-Ife (Ile-Ifé; Ifé). According to a Pataki (mythical story), mankind is said to have originated in Ile-Ife. It is a holy city of the Yoruba and had its heyday in the 13th century. It is located in the state of Osun. The spiritual leader of the Yoruba still has his seat in Ile-Ife.

Odùduwà, the ancestor of the Yoruba, lived in Ile-Ife and was the first king of Ile-Ife and Oyo. He was deified as an Orisha. His sons and daughters became the kings of the various kingdoms.

After Ife in the 13th century, the kingdom of Oyo became the dominant power of the region towards the end of the 16th century thanks to its cavalry, which it could afford through extensive trade. Oyo ruled most of the areas between the Volta and Niger between 1650 and 1800. The political order of this great country was complicated. The King of Oyo (also called Alafin titled) exercised its power through senior officials and in the subject areas through representatives who ilari and ajele called chiefs who lived at the courts of the tributary states. As priests of the state god Shango, they had great religious power. The internal political structure showed a system of balance of power. This system was based on a balance between the king and his men on the one hand and the Oyo Mesi on the other. The latter was able to depose the alafin by forcing him to commit suicide and choosing a new alafin.

Southwest Nigeria was a center of the slave trade until the 19th century. The coast was called the Slave Coast. The powerful Yoruba states were actively involved in the trade in slaves from inland. When the power of states declined, also as a result of internal disputes, they themselves became victims of the slave trade.

The religious tradition of the Yoruba is the origin of a number of religious traditions that can be found today in various countries in America. These include Vodoun (Voodoo), Santería, Umbanda, Candomblé, Macumba and a few more, whereby the boundaries between each other and with Christianity are often fluid. Today, however, the religious culture of the Yoruba is largely determined by Islam and Christianity. A 1952 census found that the Yoruba were 47 percent Muslim, 47 percent Christian, and only 6 percent animist. Muslims now form the majority in the cities of Ibadan, Oyo, Ede, Oshogbo, Iwo and Ilorin.[2]

Islam spread among the Yoruba as early as the 18th century. It also infiltrated the kingdom of Oyo through trading during this period.[3] The traditional Islamic clergy among the Yoruba will be Alfa or. Alufa called. They provide the children with an Islamic education and are also responsible for carrying out acts of sacrifice.[4] In the 1950s, ʿAbd as-Salām Bamidele (1911–1969) from Amunigun in Ibadan founded the Puritan Bamidele movement among the Yoruba (also Zumrat al-muʾminīn called). He ordered his male followers to grow beards, wear turbans, and use sticks when walking; the women had to fully veil themselves.[5]

The Yoruba have always had their own martial arts. As part of the rituals men need to enter manhood, they are trained from an early age to be specialists in such disciplines as horse riding, swimming and hunting.

Yoruba wrestling is something special for male honor. All year round, men practice wrestling in all parts of the country. The rules and the type of fight are similar to those of the Nuba peoples wrestling. During the year there are then the large-scale competitions, too Ijakadi called, where the men come together. Those who emerge victorious in a competition or duel are rewarded with high standing, fame and prestige within the community. In earlier times, such victories determined the fighter's future social status, whether he became a chief or remained a warrior.

Twin cult among the Yoruba 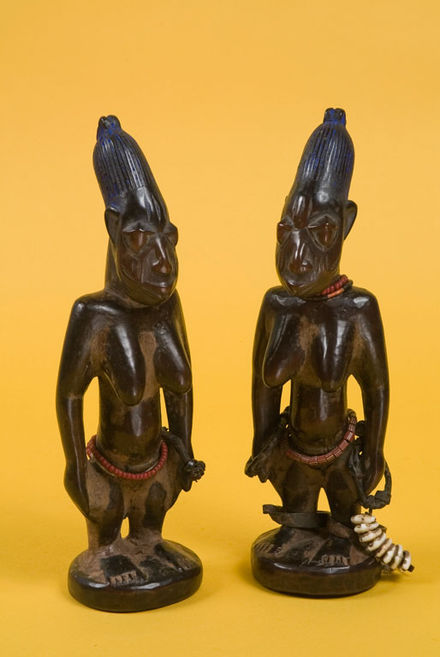 The Yoruba have an above-average incidence of twin births: 45 out of 1000 children born[6] are twins. Some scientists even speak of the Yoruba as having the highest twin birth rate in the world. Until the mid-19th century, twins were viewed as the work of the devil and often one, sometimes both children, and in some cases even the mother, were killed after birth. In the middle of the 19th century this perspective turned positive. Twins began to be especially venerated. But since child mortality was particularly high for twins, small wooden figures were carved. These were ere ibeji called, image of the twin, of ere sacred image, ibi born and eji two.[6][7] The mothers treated the wooden figures as a substitute for the deceased children and carried and dressed them like a child. The figures should serve as a new home for the souls of the deceased children and thus protect the families from the wrath of the twin soul. The Ibeji were fed and cared for like living children and are now sought-after collector's items. The first Ibjis to exist in Europe came to England in the early 19th century.