How to beat long irons better

Golf throw distance - who has the longest… drive?

Sooner or later every golfer has to deal with the topic of throwing distance and whoever trains regularly on the driving range has a pretty good sense of how far he or she can hit the ball with the appropriate wood, iron or wedge. The appropriate targets in the form of flags, nets or simply signs with the distance information are targeted and experienced golfers manage to approximate these "fixed points" - sometimes more, sometimes less.

Anyone who regularly uses the driver to tee off on the pitch also knows that it is unfortunately not that easy to execute precisely this stroke precisely and, above all, in a constant direction, or in other words "just hit the ball straight ahead". Every time this succeeds, it's an uplifting feeling but woe if this shot doesn't fit exactly and the trajectory takes a merciless curve and mutates into a slice or a hook ...

And here we are again at the biggest challenge (at least for most players) in golf: producing a constant, straight shot, which is actually the basic requirement before one can seriously deal with the shot length. If you ignore this not unimportant detail, there are mainly 4 factors that influence the distance in golf:

So when you look at these many different factors, you quickly realize that there is no such thing as an absolute throw distance with a single golf club. Because how far a stroke goes always also or in particular depends on the other variables mentioned.

But if you really want to have an overview, which one average throw distance can be achieved with different golf clubs, then you can use the contents of the following table as a rough guide.
The assumed different playing strengths are indicated by the columns "Amateur", "Semi-Pro" and "Professional". The values ​​include both "Carry" (how far the ball flies) and "Roll" (how far the ball then rolls), ie the distance between the point where the ball is before the stroke and where it is at the end is measured remains lying. 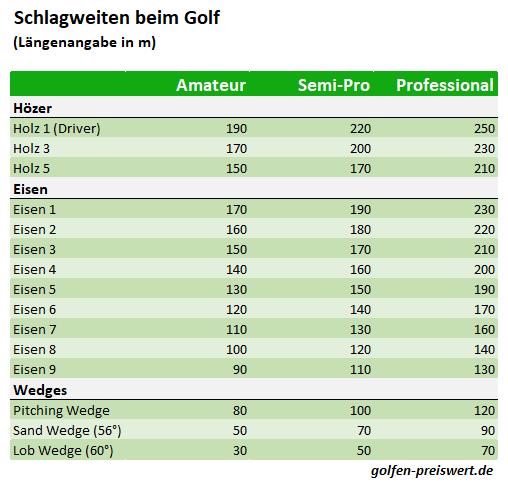 Distance table (average distance per club and level of play)

The widths are really only to be understood as approximate guide values. There is definitely one Correlation between a golfer's handicap and the length of his strokes, just as e.g. increasing age is a rather limiting factor for the striking distance. However, it should be noted that one factor alone is never decisive for how long or how far the golf ball flies or rolls out in the end.

The following applies in particular Striking technique as the factor that is most worth working on, you want yours Increase shot distance. If you look at how so-called long hitters produce their shot widths on the tour, you will see that these are not "beating muscles" but rather players of the "fine technician" type. The Club head speed at the moment of impact decides, given the same general conditions, whether a ball flies shorter or farther and whoever wants to work on its throwing distance must take care of it.
Of course there are exceptions, e.g. Bryson DeChambeau (nickname: "Golf Hulk"), the technology and Power is so effectively used or successfully combined that it can now be found among the top rankings in the men's world rankings.

Golfers know that the best shots are those on which there is as little thought as possible, everything runs smoothly and relaxed, and yet one often thinks that one should take one's shots with a little more force or speed in order to get as far as possible. When actually implemented, this usually only has the opposite effect. It is difficult to resolve this contradiction and to be conscious of one loose swing to work in which the hips, arms and wrists are deliberately used in the right place and thus the club head speed can be maximized. Only when the swing or stroke technique is robust enough is it worth intensifying your strength for an even greater stroke distance.

The stroke distance in golf, especially the tee shot with the driver, is an important factor in the game, but one should of course not neglect the other strokes when training. As the saying goes, “The duck gets fat at the back…” The score doesn't just depend on gorgeous long drives, and if you don't train your technique in putting and pitching and your precision in the approach shot just as conscientiously, your handicap will be at a certain point can no longer improve. And quite apart from that, it is often not at all wrong to play it safe and instead of taking the risk with the wood, conjure up a shorter but more controlled swing with a medium iron on the fairway.

In the end it is important that you as a player know which club you pull out of the bag in which situation in order to overcome a certain distance. Anyone who regularly assaults themselves here will not find a green branch with their handicap, because the strokes that are too short or too long often do not end on the fairway but in obstacles or in the rough.
That is why it is imperative to make your own individual pitch table to make. This creates trust and security, which will have an impact on the round. This applies to beginners and amateurs as well as to advanced golfers and pros.

The whole thing can be done wonderfully on the driving range by hitting a few balls with each club and noting the average distance you have covered. You don't necessarily have to "measure" every single club in this way. If you have a few “favorite clubs”, it is sufficient to know how far you can go with them. For longer irons you can add about 10 meters per club number or even deduct it for shorter irons.