Who does my rich uncle's bad credit belong to 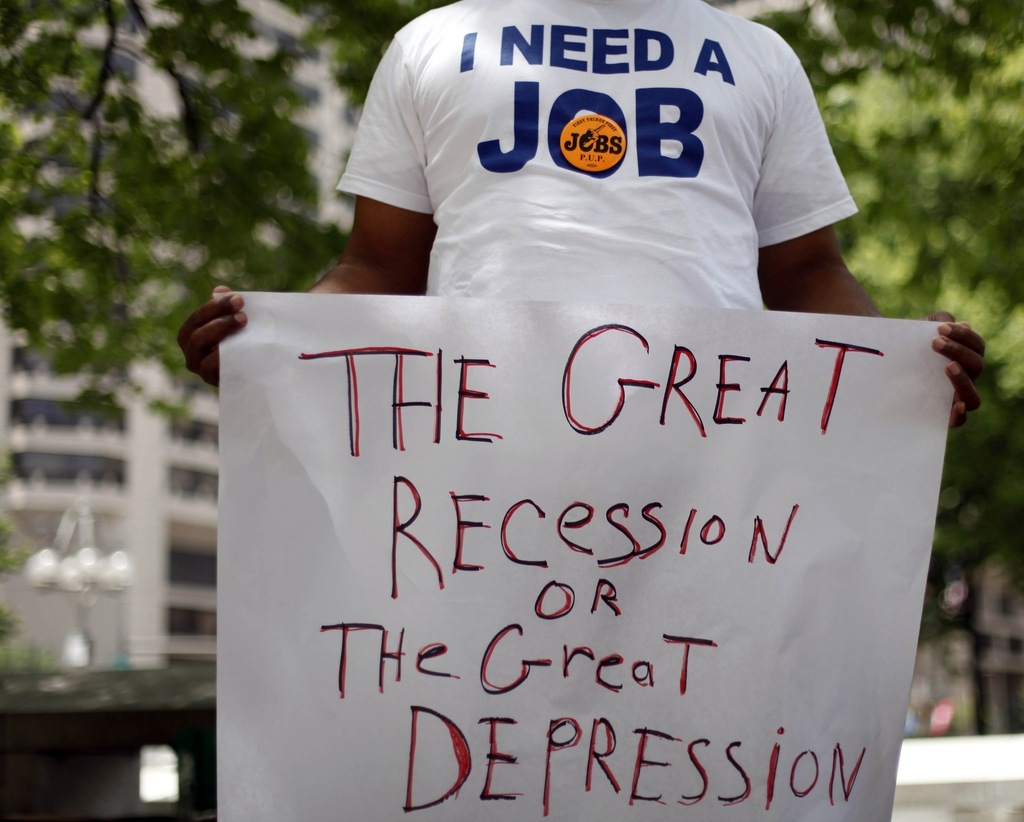 Whether the crisis is over or not, whether there is already a recession in many places - the questions are idle. The world's largest economies have never recovered since the collapse of 2008, and things are now threatened to get worse.

No, the drama of the ongoing crisis is not reflected in stock market prices, which primarily reflect expectations and disappointments. Nor does it tell whether we are technically in a recession.

It shows in unemployment. Here is what the OECD writes about it in its latest Employment Outlook:

The OECD-wide unemployment rate was 7.9% in May 2012, equivalent to around 48million people out of work - almost 15 million more than when the financial crisis began at the end of 2007. OECD economic projections from May 2012 indicate that job creation will continue to be weak in many OECD countries and that unemployment may remain around 8% in the OECD area at the end of 2013. The outlook is even more discouraging in the euro area, where unemployment is rising again and is projected to rise further before stabilizing in 2013.

As the OECD already writes: "The outlook is even more discouraging in the euro area" - for the euro area the situation is even worse. A separate report by the UN Labor Organization ILO (PDF) makes this particularly clear - here is an excellent summary by my colleague Tina Haldner. And here from the conclusions of the report:

Labor markets in the Eurozone have not yet recovered from the global crisis that hit the world economy in late 2008. Total employment remains 3.5 million lower than before the crisis. Most alarming, following a modest recovery in 2010 and 2011, employment has fallen since the start of 2012 in half of the Eurozone countries for which recent data are available. By April 2012, the Eurozone unemployment rate reached 11 per cent, representing 17.4 million jobseekers. Some countries have been hit more severely than others. Job losses were especially acute in southern Europe. (...) The quality of jobs has deteriorated as well, even in many of the relatively successful economies.

(...) If the current policy course does not change quickly, however, it is possible that a further 4.5 million jobs will be lost over the next four years. This would risk further feeding social unrest and eroding citizen’s confidence in national governments, the financial system and European institutions.

(...) At the beginning of 2012, around 31.5 per cent of the working-age population in the Eurozone were either unemployed or inactive - an increase of 1.5 percentage points from 2007. And 44 per cent of unemployed people had been without work for more than one year. Young people are increasingly at risk of a scarring first experience in the world of work, which could affect them for the rest of their life. In April 2012, the youth unemployment rate in the Eurozone was over 22 per cent. It exceeded 30 per cent in Italy, Portugal and Slovakia and was over 50 per cent in Greece and Spain.

Worst of all, politics makes things worse. It leaves the instruments lying idle that could help: Monetary policy via the central banks and even more so, fiscal policy via government spending and taxes are in a difficult position despite the gravity of the situation secondly, a strange understanding of one's own history; and thirdly, in the USA, a political blockade. Here is just a brief description of what is meant by this:

Severe recessions in the economists mainstream over the last 30 years or so are a relic from the past. Until before the crisis, monetary policy only had to follow simple rules with strictly limited objectives and instruments (inflation below 2 percent and the control of the key interest rate). That should have been enough. It is not enough now. The crisis has largely ruined the prevailing beliefs of the time before (more on this topic here).

2. The euro crisis as a just punishment for the sinful

Europe's politicians can mistakenly see the debt of the peripheral countries and their current problems mainly as their sin and as a necessary atonement (see here or here), which is why they insist on strict austerity exercises in a crisis that is reaching depression proportions in individual countries such as Spain. The above-mentioned ILO report also locates the cause of the worsening job crisis in the austerity measures.

In the USA, on the other hand, a deep political rift ensures that no fiscal pacts can be drawn up. The funds - for example for investments in the ailing infrastructure - would be cheap despite the high national debt. The country pays record low interest rates. There is also the fact that tough austerity measures are unable to reduce debt, as economic considerations also show. And even in the central bank, in the words of its former member Alan Blinder, there is a “civil war”. The "Minutes" (PDF) - a kind of minutes of the last meeting of the Governing Committee of the Fed (FOMC) under the direction of Ben Bernanke bear witness to this:

Some participants judged that the unemployment rate was being substantially boosted by structural factors such as mismatches between the skills of unemployed workers and those required for available jobs, a view that would imply less slack in labor markets than suggested by a simple comparison of the current unemployment rate to participants' estimates of its longer-run normal level.

(...) Some other participants acknowledged that structural factors were contributing to unemployment, but said that, in their view, slack remained high and weak aggregate demand was the major reason that the unemployment rate was still elevated.

Not only this argument shows that nobody denies the high unemployment. But as an argument against an active economic policy, a completely different argument is put forward: Unemployment is not at all cyclical, but structural. What does that mean?

Defective structures in the labor markets are a problem ...

If unemployment were solely structural, all economic stimulus measures would be of no use. Tough austerity measures during the crisis can then also be badly responsible for the sharp rise in unemployment. Structural unemployment means that people are unemployed because they lack the necessary training and experience for the jobs available. Structural unemployment is usually the result of structural change - combined with rules in the labor markets that make adjustments difficult or even impossible. Examples of this are jobs that are difficult to terminate (which is why entrepreneurs do not create permanent positions where possible), excessively high minimum wages and other often state regulations that protect individual jobs at the expense of others. Newcomers to the labor market - like young people - are discriminated against.

The “structural story” since the crisis has usually been something like this: Some areas, such as the construction sector in the USA or Spain, experienced an exaggerated expansion in the wake of the real estate boom before the crisis, now far fewer of these people are needed and they are are not in a position or are prevented by the above-mentioned hurdles on the labor markets from finding new jobs quickly. In this situation, it is actually of no use to try to reduce unemployment with stimulus measures. Measures are needed here to reduce the obstructive rules. But this process usually takes a long time to have an effect.

... but a problem of (currently) little importance

No question about it: there are institutional barriers in the labor markets - far more so in Europe than in the USA. There is also much to suggest that structural unemployment has increased. But that explains only a small part of the sharp rise in total unemployment. It is clearly dominated by a collapse in overall demand. However, the longer unemployment remains high, the more cyclical unemployment turns into structural unemployment. Because the longer the unemployed are, the less mentally and professionally they are able to find their way back to the world of work. Economists speak of the so-called hysteresis effect here.

For the data, a little detour via a few technical terms:

The considerations on potential growth also make it clear why the technical definition of a recession (two quarters of negative growth) is not very meaningful. An example: The potential growth in the USA is estimated at around 2.5 percent. If the economy grows to exactly this extent, unemployment does not decline, if the economy grows less, a further rise in unemployment can even be expected (more on this here). In fact, the growth estimates for the US do not envisage growth of more than 2.5 percent, which is why unemployment is unlikely to decline significantly for the time being - even if the economy is technically not in a recession.

Back to the NAIRU: Anyone who claims that unemployment is primarily structural and not cyclical, is claiming that the NAIRU has risen dramatically (or potential growth has fallen dramatically). However, according to the latest data from the OECD, there is little to be said for this. As the following graphic from the Employment Outlook 2012 on page 32 shows, the NAIRU did indeed increase in the countries particularly affected by unemployment, but it explains only the smallest part of its overall increase. Most of the increased unemployment is clearly due to the collapse in overall demand (reading example for ESP = Spain: the increase in the unemployment rate between 2007 and 2011 is 14.4 percent, only 3.4 percent of which is an increase in structural unemployment): 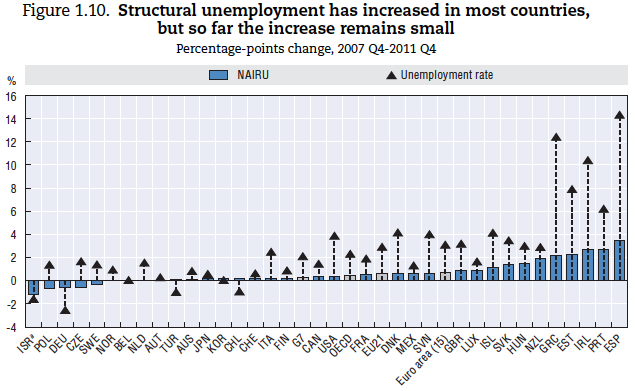 Rules that increase the flexibility of the labor markets are of little use - if there is no demand, that is, if there are no economic stimuli. Because if overall demand does not return, it is of little use if people are suitably qualified. Even reducing the protection against dismissal would not help in this situation, because the laid-off workers cannot find another job and the jobs would not be replaced. This is also shown by the above-mentioned ILO study:

... 13 out of 17 Eurozone countries have carried out labor market flexibility reforms, often in the direction of easing dismissals. However, in a depressed macroeconomic context, these reforms are likely to lead to increased numbers of layoffs without any boost to job creation at least until economic recovery gathers momentum.

Another simple investigation into whether unemployment is mainly cyclical or structural is provided by so-called Beveridge curves - named after the baron of the same name, social reformer and economist from the middle of the last century. Put simply, if structural unemployment rises, the increased number of unemployed in some sectors would have to be offset by a shortage of employees in other sectors. Not all of them can suddenly be unsuitably qualified. In the case of cyclical unemployment, on the other hand, unemployment generally rises across all sectors. 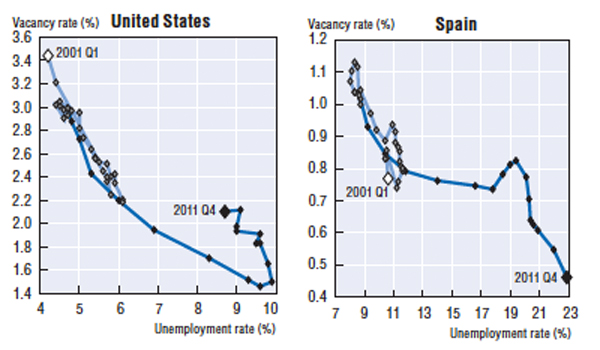 The data clearly show that unemployment is primarily cyclical. The fact that politics is doing too little here is tantamount to a crime against an entire generation.