Wilson Audio Watch Dog
Going back over 15 years, Dave Wilson has pursued unusual shapes in every one of his subwoofers that I've worked with. The WAMM subwoofer of old and today's flagship, the mighty XS, adhered to the upright-coffin theme, while the WHOW and POW-WHOW of a few years ago were based on the massive coffee-table aesthetic. It's hard to tell what inspired the super-sized form factor of the Watch Dog, but if it was something from the canine world, it must have been a full-grown St. Bernard. 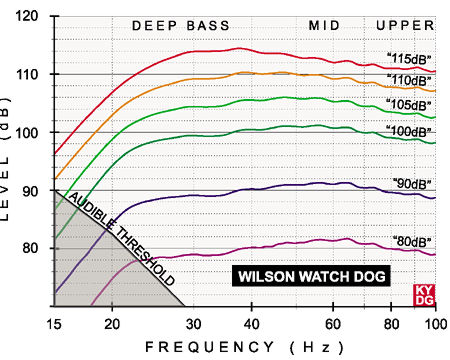 Frequency response at higher levels: The picture at the 100dB playback level was similar to that at 80dB (Fig. 5), with response registering within +/- 0.6dB of the 80dB result (except 20dB higher) at all frequencies. As drive level increased, response held up especially well in the 28–40Hz range, which most listeners perceive as deep, almost feelable bass, and sagged moderately on both sides of it.

Dynamic range: The Watch Dog showed some modest power compression below about 25Hz (Fig. 6) and above approximately 50Hz; between those frequencies, the Wilson tracked the dynamics of the input signal very closely, even at a pants-flapping 115dB. 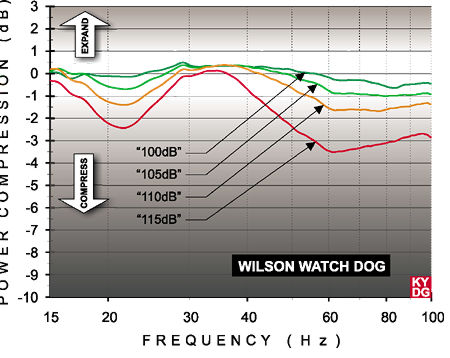 The graphed results of the shaped tone-burst tests (Fig.7) Show that the Watch Dog developed higher-than-average maximum peak output prior to the onset of audible distortion, especially in the very bottom octave. Its competitiveness began to slip at 63Hz and above. This will not be cause for concern in many installations, where the watch dog will be crossed over somewhere in the 50-60Hz range. 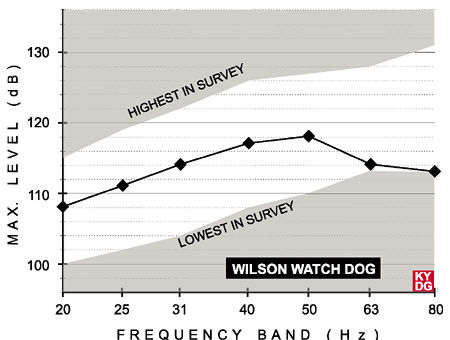 Total harmonic distortion: The distortion bars (Fig. 8) show that the Watch Dog was cool and collected at around 40Hz no matter how hard I drove it. Distortion sailed off the chart only when I pushed the Wilson to 115dB at 20Hz. When eased back to 110dB, the Dog's THD remained at or below 5% at every test frequency except 20Hz, where it registered 11.1%. 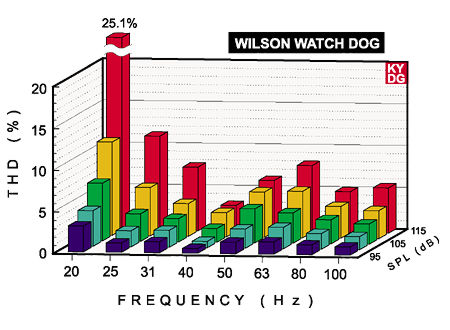 Several types of distortion peculiar to bass-reflex systems and almost entirely missed by THD and harmonic-tracking tests are chuffing, whistling, and other nonlinear, port-related noises. The Watch Dog was not immune from these noises, especially during the 110 and 115dB frequency-response tests, which are based on slow sinewave sweeps: When the drive signal descended below about 30Hz and the sound source moved from the 12-inch driver to the two slot-type ports below, the resulting chuffing noise became distracting.

Listening
Playing "Jurassic Lunch" disabused me of the notion that even a big-pawed hound might be a match for a T. rex in a clomping contest: As the waterfalls show (Figures A1 and A3), the ground-shaking 10-20Hz energy in the dino's final step at 1:02 was largely beyond the Watch Dog's ability to answer with anything more than a hoarse, half-hearted growl. (There's that port chuffing again!) Predictably, at 20-25Hz, the bark was backed with bite, helping the unit hit a clean peak of 104dB, beyond which distortion suggested that this dog was at the end of its leash.

But when I reconnected the main speakers and replayed the scene, replete with the full assortment of dino roars and gustatory accompaniment, I couldn't help but notice that the little family of deer who normally live under a tree about 30 yards from our property line had disappeared.

Provided the subwoofer can convey the oceanic scale of the danger all around, the depth-charge scene almost 80 minutes into U-571 (Figs.B1 and B3) can be riveting. The Watch Dog did a creditable job on this passage, though the emotional effect was well short of the shock and awe produced by the big Genelec, which managed distortion-free peaks fully 11dB higher, translating to somewhere north of subjectively twice as loud. Like the majority of subwoofers, the Watch Dog simply couldn't play the strong sub-20Hz content in the U-571 soundtrack with enough undistorted level to make the pressure feelable and therefore real.

Moving to the Black Hawk Down excerpt (Figs. C1 and C3), the Watch Dog's almost total freedom from dynamic constriction in the 30-35Hz range can be seen in both the power compression curve and in the comparatively redder vertical stripe at 31Hz in the waterfall. This contributed to a fairly believable sense of air being slammed groundward by big rotating blades while soldiers scrambled into their choppers.

The slight but occasionally nagging sense that the deepest bass lacked a firm underpinning varied with the program material. For example, The Matrix chopper explosion and the tunnel crash in Star Wars: The Phantom Menace were brought off without the sense that anything other than good acting was wanting.

Turning to CDs, the Casper soundtrack and Holst's jaunty First suite were rendered with a welcome sense of completeness and, therefore, rightness. Béla Fleck's "Flight of the Cosmic Hippo" was an absolute joy to hear, with Victor Lemonte Wooten's slip-slidey, fat-toned fretless bass nicely evoking a rotund hippo wallowing through the cosmos. When the tune works its comical magic, it's because the can't-nail-him-down hippo line plays against the foil of a bass drum whose solidity and groundedness propel the piece forward. It was the Wilson I wheeled into position whenever I wanted to demonstrate this number for friends dropping by. Ranging outside of my core selections, the Dog got full marks on Holly Cole's "Jersey Girl," and a couple of old audio demo warhorses by Flim & the BB's: "Tricycle" and "Fun House." The Dog sank its teeth into the drum groove of "When the Cat Turns Blue," from Rusted Root's When I Awoke album, and wouldn't let go.

The bottom line
The Watch Dog left me impressed but occasionally less than fully satisfied. I wish the ports didn't chuff. I wish it stayed strong a little deeper into the bass. I wish it were a little smaller. I wish it cost less. I wish these things only because its basic performance was rarely less than very good, and often excellent. I wish them because the physical package stands out from the crowd, with premium materials and immaculate fit and finish.

Lastly, I wish them because the Watch Dog shows how far a designer can take a single 12-inch driver. It's often accepted as axiomatic in audiophile circles that subwoofers using small-diameter drivers like the one in the Watch Dog sound better than those relying on 15- or 18-inch units because the former are intrinsically "faster." The truth is, speed is tied to frequency: the higher a driver plays, the faster it goes. Because bass is produced by "volume displacement" —that is, the driver's radiating area (bore) times the distance it can move (stroke) —a small, single driver is at a relative disadvantage because it has to work harder to generate the same output level at any given frequency.

Smaller-is-better cheers from the sidelines notwithstanding, the Wilson Audio Watch Dog was sent into the fight with one paw tied behind its back. That it came out with its hide intact is a tribute to getting the fundamentals right: a relatively wide, smooth frequency response; modest distortion; only mild power compression in the important 30-40Hz range; good driver-cabinet matching; and confidence-inspiring quality control.