What did barons wear in the Middle Ages?

Women's clothing in the Middle Ages

The dress code, which existed in the Middle Ages and was fixed in writing, stipulated which clothes could be worn by the members of the different classes. For the women of the lower classes, the clothing had to be functional, simple and suitable for work. Only minor changes have been recorded here over the centuries. However, the clothing of women of the upper classes showed significant changes in fashion. In addition to its functional aspect, it was above all the external characteristic of the stand of the wearer.

Clothing of the women of the simple rural population

The women who worked in the country wore comfortable and baggy clothes in which they could easily go about their daily chores. So her dress was long, pleated and wide. It was held in place by a simple belt. In summer the dresses were sleeveless, in winter they were long-sleeved. If the woman wore a hat, it was a simple hood or cap made of felt. Most of the time, however, her head was not covered; she wore her hair either loose or in a plait. Her shoes were made of leather or made of soft wood. The materials from which the clothing was made were produced on the farms themselves. They included linen, flax, wool, and leather. Because the dyeing of the fabrics was on the one hand a very expensive affair and colored clothes according to the dress code on the other hand for aristocratic women 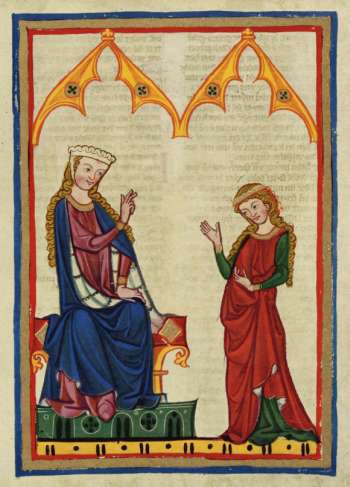 were reserved, the clothes of common women were mostly black or gray, more rarely brown.

Clothing of noble women in the early Middle Ages

The clothing of the women of court society showed clear fashion developments over the centuries. In the early Middle Ages, the clothing of noble women consisted of two tunics worn one on top of the other, over which a cloak was pulled. The women, like their rural counterparts, made at least some of their wardrobe themselves. Precious fabrics that were considered luxury items were imported from Byzantine workshops. They were characterized above all by the fact that they were richly embroidered and provided with gold plates. Only with the development of urban centers did the company set up its own production facilities, in which tailors, furriers, leather workers and weavers took on this work.

From the 12th century, the main components of court women's clothing were the shirt as an undergarment and the skirt as an upper garment. A coat completed the ensemble. This was worked as a cord coat. The noble women also wore the so-called surkot or kursit, which also served as a coat, but was cut wider, sleeveless and often lined with fur. Shirt and skirt changed, they were now laced tightly to the body, which led to the emphasis on the feminine form. Important accessories were ornate belts and gloves as well as detachable decorative sleeves, which, similar to the skirt, often formed a train. As headgear, the noble woman wore various forms of veil such as Schapel or

At around the beginning of the 14th century, the décolleté found its way into women's fashion. Just like the now more body-hugging clothes, this was to be seen as a further emphasis on the femininity of the wearer. The fabrics were brightly colored, made of precious materials such as brocade, silk and velvet, and for the most part with rich decorations, embroidery or gold flakes. In addition, the clothes now often showed the incorporation of valuable furs or jewelry. The marital status of the noble woman could be read from the respective headgear. Unmarried women wore a Schapel, married women a veil or a rise that served as a breast veil. Towards the end of the 14th century, bonnets with horns were also increasingly worn.

The luxurious and expensive clothes and the changing fashions remained a privilege of the nobility until the end of the Middle Ages. For a long time, the clothing of the secular upper class was inaccessible even to rich farmers. However, at the beginning of the 15th century there were already tendencies towards dissolution of the fixed dress code. It is known from literary sources that wealthy peasants now used the textile splendor of their noble contemporaries as an example. The dress code, which visibly conveyed the class differences to the outside, gradually dissolved. To the extent that individual farmers became wealthy while parts of the upper class got into existential economic hardship, it became irrelevant.