Motorsport-Magazin.com - Denny Hamlin is the first winner of the new 2020 NASCAR Cup season. The Gibbs Toyota driver won the prestigious start of the regular season and the end of the speed weeks at Daytona International Speedway. After 209 laps with two extra times, Hamlin won the floodlit race on Monday after an impressive performance. It was Hamlin's third Daytona 500 win in five years and the second in a row. It was also the 38th career victory. Hamlin had also won the second stage and Chase Elliott had previously won the first stage of the season. Two 'big ones' caused prominent failures. The race ended in a serious accident involving Ryan Newman, who flew across the finish line on the roof. Update: Newman was transported to a hospital. NASCAR race director Steve O'Donnell said two hours after the race: "Ryan Newman is being treated at Halifax Medical Center. He is in serious condition, but doctors have indicated his injuries are not life threatening." (more information in the NASCAR NEWS) 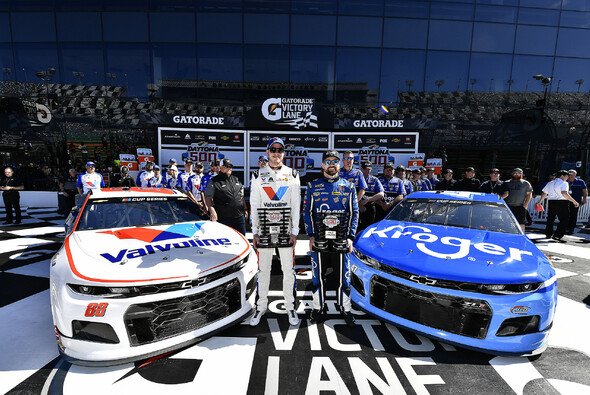 In qualifying for the first race of the season at Daytona International Speedway, the individual time trial was only about the front row. The remaining positions were determined in the two duel races. Ricky Stenhouse Junior had to start as the 18th starter. It achieved a speed of 194,582 mph in 46,253 seconds. No following driver could beat this time. With this, Stenhouse and his new team JTG Daugherty Racing secured the Daytona pole for the first time and won the third pole award in his career. Alex Bowman took second place in the Hendrick-Chevrolet, 0.052 seconds behind. This is the third time in a row that Bowman will start from the front row of the grid at the Daytona 500.

In the two duel races over 60 laps each, the starting positions three to 40 were achieved. Joey Logano won the first race and William Byron won the second race. The ten best-placed pilots received bonus points. Identical to the stage mode, the winner received ten points and the tenth received one bonus point. For Logano it is the 400th cup race at the season opener. Chase Elliott, who starts from 25th place, is also celebrating a small anniversary with the 150th start. Cole Custer was the best placed rookie and starts the race from position twelve. One row behind is Clash winner Erik Jones. Chad Finchum, J.J. Yeley and, surprisingly, Daniel Suarez. 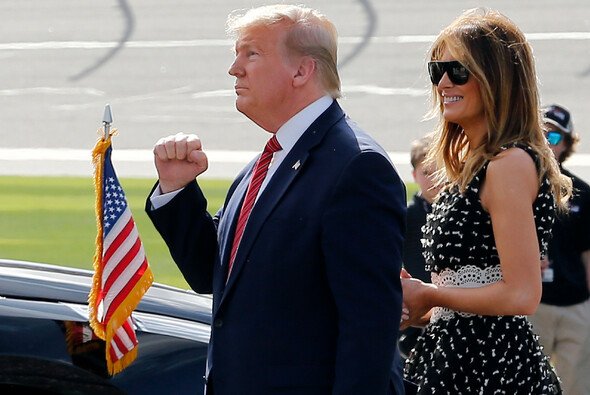 The US President visited Daytona

Start / Stage 1 (Sunday): After President Trump gave the command to start, the sky opened its floodgates

A rain shower caused a start delay of 63 minutes. Pole setter Stenhouse defended his position after the start. After completing 15 laps, Stenhouse was still in the lead. The five Toyota drivers finished in positions 32 to 36 together. After 16 minutes of racing, there was another rain break on lap 20. The pace car and leader Stenhouse led the field into the pit lane. 90 minutes later, even the greatest optimist looked at the weather radar and saw no chance for the race to continue. Only those responsible for NASCAR were silent and enthusiastically watched the convoy of Air-Titan vehicles at work. After another two hours and 15 minutes of continuous rain, the race was finally postponed to Monday 4:00 p.m. local time.

Restart / Stage 1 (Monday): Continuation of the race from lap 21 ends with a stage win for Chase Elliott

For the 20th time a race had to be postponed to a Monday. Appropriately, there was the restart from lap 21. Although without President Trump, there was a blue sky over Daytona Beach with sunshine at 24 degrees. Pole setter Stenhouse had previously led the field on every lap on Sunday. The race continued with pit stops. After the restart, Brad Keselowski took the lead. The Toyota drivers stayed at the end of the field.

Then the lead changed between some Ford drivers before all four Hendrick Chevrolets appeared in front from lap 44. The first two stages have been extended by five laps this season, giving the top 10 drivers the first bonus points after 65 laps. On lap 59 there was contact between Stenhouse and Byron. Byron flew into the infield safer barrier.

There were yellow cards and pit stops. After the restart, there were still two laps to drive. The three remaining Hendrick drivers continued to lead. Elliott defended the lead and won the first stage of the new season after 22 leading laps. Alex Bowman came in second ahead of Aric Almirola, Logano, Jimmie Johnson, Blaney, Stenhouse Ty Dillon, Matt DiBenedetto and tenth Chris Buescher.

After the conclusion caution with pit stops, Denny Hamlin led the field at the restart. All five Toyota drivers were suddenly in the top 10. Was it a change of tactics for the Gibbs team and Leavine Family Racing with rookie Christopher Bell? Even after completing 90 laps, the four Gibbs drivers were still in the lead. In the same lap, Almirola shot down rookie Quin Houff. B.J. McLeod was also hit. There were pit stops after the fourth caution.

Almost all drivers only took two fresh tires with them when they were serviced. Hamlin and Stenhouse led the restart. When the race was closed after 100 laps, the picture at the front had not changed. Elliott was also in the top six. So far, with the two exceptions, the race has been very disciplined. The famous calm before the storm, which will rage in stage three at the latest.

Ten laps before the end of the second stage, Hamlin was still in the front. Ross Chastain had meanwhile sneaked a top 5 place. Hamlin took the stage victory after 62 leading laps. Kyle Busch came in second ahead of Stenhouse, Martin Truex Junior, Chastain, Johnson, Elliott, Blaney, Logano and Buescher.

After the pit stops, the last stage over 70 laps. Truex flew a gas bottle from the Elliott team in front of the vehicle on the exit. Blaney won the restart ahead of Logano. Then Stenhouse took the lead. Then Logano pushed Blaney back in front. In the first laps of the third stage there was more going on than before in 130 laps. From lap 140 it was all about first place in three rows.

The leadership changed constantly. Now Kyle Busch was the leader for the first time. Beyond it was Hamlin in front of Bell and Jones. Then Keselowski successfully ventured forward. It was starting to look like a duel between Team Penske and Joe Gibbs Racing. After 160 laps, the spectators were able to watch 16 changes in leadership by eleven drivers. Stenhouse was the only driver to make a pit stop on lap 164. The leaders came in for a pit stop 30 laps before the end of the race.

Twelve Chevy drivers and Timmy Hill in the Ford were now in the front because they had not yet been to service. On lap 174, Stenhouse came into the pit lap pretty shattered after colliding with Jones. There was no caution, however. Rookie Custer also complained about cold deformation. After the last 13 pilots had completed their stop, they were briefly behind the first group of 14 drivers. Then defending champion Kyle Busch's Toyota was smoking. He had to make an extra stop.

There were pit stops. 22 drivers were still on the track at the restart. It led Newman ahead of rookie Bell, Elliott, Logano, Hamlin and the previously inconspicuous Kevin Harvick. There were now ten laps to go. Logano pushed Newman forward. Reed Sorenson and Timmy Hill crashed on lap 193 and caused the seventh caution period. Newman was leading at the restart on lap 196 ahead of Logano, Hamlin, Kyle Larson and Ryan Preece.

Now Hamlin was promoting Newman to the front and both drivers had separated. Then Hamlin shot past Newman. There was the second 'Big One' two laps before the end of the race. Chastain wanted too much and was the trigger. Besides Chastain, Reddick, Elliott, Ty Dillon, Logano, Michael McDowell, Preece and Bell were also involved. It was the eighth race break and the second red phase.

Hamlin had six Ford drivers on his neck in extra time with Chris Buescher, Harvick, Clint Bowyer, Newman, Blaney and McDowell. Pit stops were made from 14th place out of 19 remaining vehicles. Logano was still there with a lap deficit and a junk truck. On the starting line, Bowyer and McDowell shot each other after contact with Haley. So there was another 'Green-White-Checkered' extension.

Hamlin won the restart thanks to Blaney and immediately pulled away slightly. Then Elliott turned. The race continued anyway. Newman went in front. Then Newman flew off and sped through the target, burning on the roof. Hamlin had pushed himself in front of Blaney at the last moment and won the 'Great American Race' for the third time. Behind Blaney, Buescher was third in front of Ragan, Harvick, Bowyer, Gaughan, Corey LaJoie, Newman and tenth Larson. 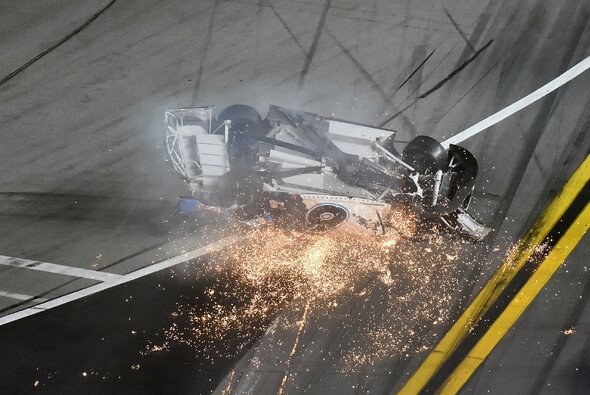