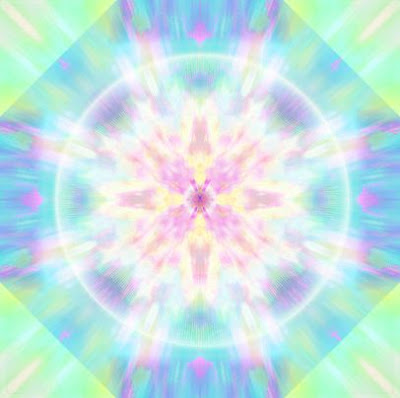 Cosmobiology and Medical Astrology
Many of the ancient wisdom teachings understood the mathematical concepts of the connection of the universal human body and its interaction with cosmobiology. The mathematical and astrological correlations were made between the principles in the cosmos and its relevance to organic life forms, as well as those for the need to study the effects of these cosmic forces and the star movements and astronomical conjunctions that affect the world of forces on earth.

The Pythagorean Mystery Schools taught that the solar system is a massive musical instrument and that the twelve signs of the zodiac can be compared to the semitones of the chromatic scale. The chromatic scale is a scale with twelve pitches or frequency tones, each one semitone above or below the tone next to it. The same structure also represents the architecture that exists within the dimensional scale of the holographic reality. The twelve planets form the white keys of the cosmic musical connections. Each constellation is an intelligent body of consciousness that transmits spectra of color wave frequencies and mathematically coded patterns that are associated with the construction of metaphysical structures into the form. Each constellation represents an astrological sign that reacts to a certain frequency tone and a certain color wave. Some of these frequency tones blend together and are harmonic while others get discordant and distorted. Since we can feel the disharmony and conflict between certain notes on a piano, or feel the distortions that run in mainstream music, this effect has the same effects within these metaphysical forces. There are similar themes of harmony or discord that emerge between the alchemy of forces that occur within the various constellations of the zodiac, the twelve planets and various celestial bodies, and which have a great effect on man. These sets of instructions are inherently recorded in the spiritual plan and design of every person on earth.

As we incarnate into a physical human form, we evolve through the phases of precession of the equinoxes, and this progression takes us through all twelve layers of archetypal forces that contain and transmit instruction sets for the universal human body structure and DNA levels. As the sun moves through each constellation, we receive a frequency exchange of intelligent instruction sets designed for the human body to evolve towards increasing DNA activation and spiritual ascension.

It is the alchemical forces that are transmitted into the earth field. When astrological alignments take place through major conjunctions occurring between planetary and stellar bodies, forces of alchemy emerge that alter the frequency current and manifest new creations that help expand consciousness on the planetary and personal level. With the war for consciousness, humanity undergoes psychological operations to prevent them from actually participating or becoming aware that these stellar forces are being transmitted to Earth for the purposes of bio-spiritual development.

Mystery schools developed the field of latromathematics or latroastrology (Note: from the Greek, also known as astromedicine. Was a medical concept based on astrology and associated mathematical calculations to describe the position of man in the cosmos) and looked at the entire matrix of the human body through astronomical and astrological principles as well as biomechanics. The twelve astrological signs contribute a specific law of structure built into every part of the human body from head to toe, inside and out. In addition, planets and the existing cosmos in space are directly related to certain parts of the body that are intended to unite the layers of consciousness structures as a whole. By examining a natal chart, the latromathematician checked the patterns of the birth print as (soul) star bodies and was able to study the various combinations of energetic forces and how these forces affect the human body and human consciousness. By observing the behavioral profile that would reveal general tendencies in constitution and disposition, they would become aware of the specific patterns in that individual to help them align with their highest nature to achieve the state of health and wellbeing . Each of us can study our own astrological patterns to gain knowledge of the inner workings of the self.

Medical astrology reflects the law of principle in each of the twelve constellations associated with maintaining structure in the parts of the human body. From the guardian's perspective, the galactic zodiac includes another important constellation called the serpent bearer (Ophiuchus). This is the missing 13th constellation, which acts as the union and trigonal force for all other twelve constellations during the ascension cycle. Thus, in our model, the constellation forces that are represented are the thirteen signs of the Galactic Zodiac, which preside over the parts of the body and cover the body from the head (Aries) to the toes (Pisces), as follows:

Physiology in relation to the Galactic Zodiac 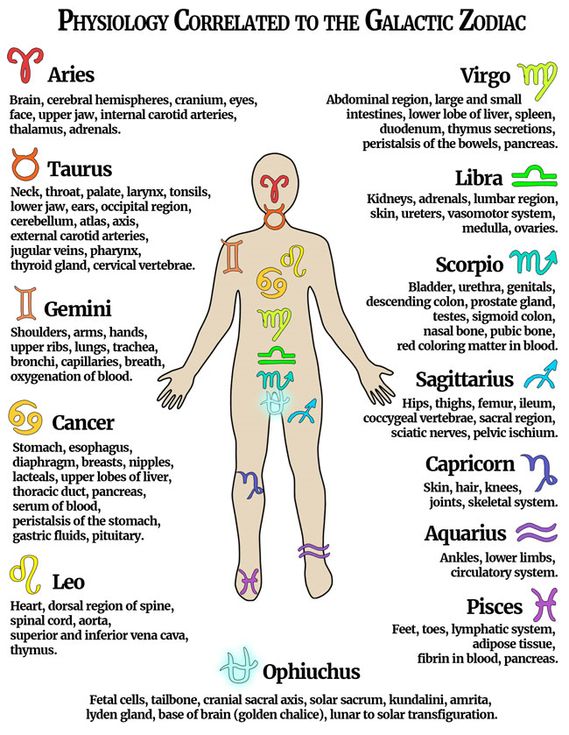 The human body shape represents the movement created by the precession of the equinoxes, with every astronomical and astrological principle having direct relevance to our physical and spiritual anatomy. When we remove or transplant body parts, we remove imprints and specific principles in our body structure that change and shift influences of consciousness that have consequences for our spiritual development. Not to mention the potential problems throughout biological function, such as the disconnection of internal circuits between transplanted organ systems that can block integrative and holistic healing for the body, mind and spirit.

The snake bearer is the triple unifier

In addition to the serpent-bearer transmissions, the divine fire-water element functions as a trine and unity between each of the squares in the combinations of four constellations that make up the cardinal, fixed and mutable signs. In the previous cycles, the spiritual blueprint of humanity contained many squares and oppositions in the natal imprint of certain planetary or constellation conjunctions that created disharmony, conflict and distress. These oppositional forces constrained spirit and resulted in a variety of spiritual oppressions, miasmatic patterns and karmic burdens. It is similar to saying that squares, oppositions and boundaries recorded in the geometries of the spiritual blueprint can be understood in the natal chart and are the result of the consequences of actions, unlearned lessons, spiritual purpose and the debts of fate that have been carried through several lifetimes. The earth body also has its own blueprint, which is composed of the collective consciousness records of humanity. So when we incarnate in a timeline on earth, we are also imprinted with the karmic loads of the collective consciousness imprint at the time of incarnation.

It is also correct to say that the NAA had control over aspects of the twelve constellation transmissions that had led to more extreme negative polarities in the world of forces in order to achieve its intended goal of control over material forms. They intended to radically increase the black subtle forces by filtering out negative polarity aspects of the constellation archetypes in order to bring humanity into negative polarity and use planetary dark matter to power AI machines. An example is to observe the accumulation of negative polarity in the principles of the Libra constellation in the masses, which represent an energetic equilibrium in the world of forces, and to observe when the energetic equilibrium is destroyed by violating the laws of nature, which creates rampant disease . Libra rules the kidneys, and if we see the rate of kidney disease skyrocketing on earth, this imbalance of the scales can be considered a potential factor.

These discordant frequencies in the birthprint can be described as a vicious circle, the challenging oppositional patterns that create intense conflicts between the personality and the higher self. In 2013 we began the serpent bearer transmissions, which are simply understood as the flow of harmony and divine grace towards humanity during the ascension cycle. This allows for many releases in the intense squares of opposition recorded in the original birth blueprint and helps bring the karmic pattern back into a smoother flow of harmonic and aligned frequencies.

The Serpent Bearer transmissions can be consciously participated in during each cycle to help release oppositional magnetic imprints in the natal chart, although this will of course be done when you surrender to the process. The final cycle of the serpent bearer transmissions had themes to release and clear the harmful blood oaths in the bond between family and lineages. There are three primary activation areas in the body that act as a unit of all chakra centers and body parts, first the coccyx and sacral areas, then the higher heart complex and the third is the center of the brain and sphenoid bone. The divine water fire of the serpent bearer transmissions is supposed to harmonize the elements present in the body better by releasing contradicting patterns in the field of the trine unifier and extinguishing what is called the peacemaker pattern.

Recently, some waves of ascending humans have experienced changes in the transmutation sequence connections defined in their original birth pattern on earth in order to clear blood vow records. This elevation of 3-D incarnated karmic birth patterns during the bifurcation is a result supported by the Triple Unifier of the Serpent Bearer transmissions and reached critical mass last December.

As you review this month's newsletter, please remember to use common sense and not judge anyone who has been empowered to do organ transplants or who have become enticed into becoming an organ donor. We live in times of great deception and falsehood, in a controlled system of reversal where controlled systems like the medical system are massively profitable businesses that actually do the opposite of what they represent. This topic has been offered for deeper education, to develop clarity about the universal human body, the reality of spiritual anatomy, and to think deeply about the nature of the reality in which we find ourselves today. The problems we have on earth are extremely complex and will not be solved overnight. The first step is to understand the many ways our society violates the laws of nature right under our noses, so that we can see how we contribute to these violations without our awareness or consent. When we are informed and know what we have in front of us on earth, we automatically have the personal decision-making power and consent that enables us to return to adapting to the laws of nature.

Please only take what is useful for your spiritual growth and discard the rest. I thank you for your courage and bravery in being a seeker of truth.

I am Divine, Sovereign and Free!

Next time stay in the radiance of your Avatar-Christ-Sophia-Heart-Path. Please be kind to yourself and to others. GSF!

With a loving heart